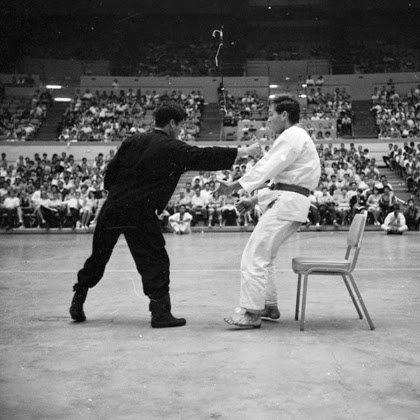 The one-inch punch was made popular in the west when demonstrated by Bruce Lee founder of the martial art Jeet Kune Do, at the Long Beach International Karate Championships in 1964.

The one-inch punch is a punching exercise from Chinese martial arts (kung fu) performed at a range of 0–15 cm (0–6 in). It is designed to improve punching power and technique.

The one-inch punch is a skill which uses fa jin (translated as explosive power) to generate tremendous amounts of impact force at extremely close distances. This "burst" effect had been common in Neijia forms. When performing this one-inch punch the practitioner stands with his fist very close to the target (the distance depends on the skill of the practitioner, usually from 0–6 inches). A quick movement of the wrist produces the force needed, the wrist is held with the knuckles facing out on a horizontal axis, the wrist is then moved up and a strike is produced with the bottom two knuckles. The target in such demonstrations vary, sometimes it is a fellow practitioner holding a phone book on the chest, sometimes wooden boards can be broken.

Dana White has long been calling Bruce Lee the 'Father of Mixed Martial Arts', and the UFC has even added him as a playable character on their upcoming video game. Whether you agree with the UFC president or not, Bruce Lee is an icon in the Martial Arts world, whether from inspiring fans with his films, or influencing generations from his philosophy about fighting.

Among his signature moves is his one-inch punch, a short shot that still manages to generate an insane amount of power. Jessica Rose, a Stanford University biomechanical researcher, has explained the science behind the punch and PopularMechanics has the summary:

"When watching the one-inch punch, you can see that his leading and trailing legs straighten with a rapid, explosive knee extension," Rose says. The sudden jerk of his legs increases the twisting speed of Lee’s hips—which, in turn, lurches the shoulder of his thrusting arm forward.

As Lee’s shoulder bolts ahead, his arm gets to work. The swift and simultaneous extension of his elbow drives his fist forward. For a final flourish, Rose says, "flicking his wrist just prior to impact may further increase the fist velocity." Once the punch lands on target, Lee pulls back almost immediately. Rose explains that this shortens the impact time of his blow, which compresses the force and makes it all the more powerful.

By the time the one-inch punch has made contact with its target, Lee has combined the power of some of the biggest muscles in his body into a tiny area of force.

While the mechanics concerning multiple muscle movements have been explained, the study states that Bruce Lee's muscles aren't exactly the most important factor here. Everything segment and motion during the punch relies on timing, coordination, and accuracy.

As they state, "each joint in Lee’s body has a single moment of peak acceleration, and to get maximum juice out of the move, Lee must layer his movements so that each period of peak acceleration follows the last one instantly". This is where the brain comes in.

Although obviously not done with Lee's participation, a separate study conducted in 2012 by Ed Roberts, a neuroscientist at Imperial College London, found a similar conclusion. They put together Karate experts along with equally fit and built people from a non-martial arts background, and compared their short distance punches, which the study states to be 2 inches or less.

The martial artists unsurprisingly had resulted with the stronger punches, but the more interesting finding was that it's not just the body's muscles that factor in with their explosiveness. A lot has to do with developing the brain to adapt and cope to certain situations: 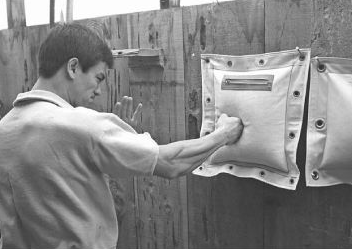 When Roberts took brain scans of his study’s participants, he also found that the force and coordination of each participant’s two-inch punch was directly related to the microstructure of white matter—the substance that manages communication between brain cells—in a part of the brain called the supplementary motor cortex. This is important, because this brain region handles the coordination between the muscles of the limbs, which close-range punches rely on. The altered white matter allows for more abundant or complex cell connections in that brain region, Roberts says, which could increase the puncher’s ability to synchronize his or her movements.

So Bruce Lee owes his master feat in part to a beefed-up glob of white matter. Like his muscles, Lee earned his brainpower the hard way, with many years of practice. Roberts says the white matter changes in his study’s participants can be traced to the concept of neuroplasticity—the brain’s ability to fundamentally rewire itself to cope with new demands.

As the study shows, the more these martial artists train and practice these complex motions, it's not just the muscular structure in the body that improves, the white matter in their supplementary motor cortex also copes and evolves more.